Last weekend a group of great us headed to Osp in Slovenia for 4 days of climbing in the sun. We left on Saturday morning around 6 am. After around 3 hours of travelling, we finally arrived at the campsite in Osp, the view was absolutely stunning. 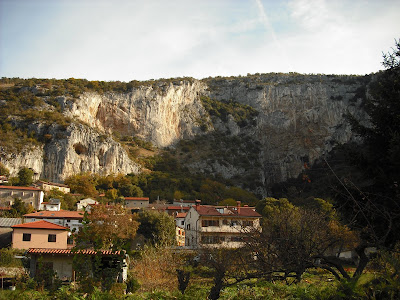 It was 9 am and although everyone still looked like they’d just rolled out of bed, I think we were all psyched to get on the rock as soon as possible. We set up camp; 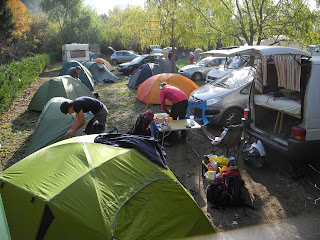 some people taking a lot longer than others, not mentioning any names. After having eaten breakfast and gaining some much needed strength, we decided where people wanted to climb; the general consensus was that going to Crni Kal would be a nice start to the trip. It was a bank holiday weekend so the crag was pretty crowded, mostly with groups of children. Most of the easier routes were occupied so we jumped on any free routes we could.
Everyone had a good day, some people just enjoying easier routes and others really trying to push their grades and get over the fear of falling by taking as many falls as possible. Considering it was late October, the weather was amazing; it sometimes even felt too hot to climb. We stayed at the crag until sunset; a successful and entertaining day of climbing was had by all. A group had left slightly earlier and we had not properly calculated how many people were left at the crag. There were 8 people and we only had one car, we were determined we would get everyone in the 5 seater car but in the end decided this was a very bad idea. That evening it felt like feeding time at the zoo, everyone was starving and very tired. We all enjoyed a lovely evening with great company and great music. Some of us went to bed at 10pm and was woken up by a dog being let into our tent; this was very entertaining… for some of us. 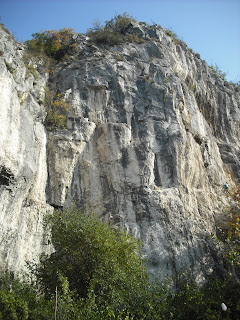 Sunday was spent climbing at Osp, the Crag has 194 routes, most of the routes however are 6a and harder. A lot of climbing was done followed by lots of napping in the sun. It was a lovely day. The evening was spent drinking wine, chilling out and laughing at Marcus and Jarko’s communication issues. 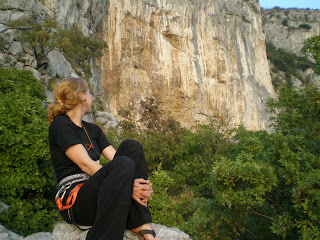 After having rained for most of the night, we were lucky to wake up to glorious sunshine and more importantly dry rock!! One group headed directly to Crni Kal but the rest of us decided to climb half the day at Misja pec followed by Crni Kal. The climbing at Misja pec was challenging but very satisfying. 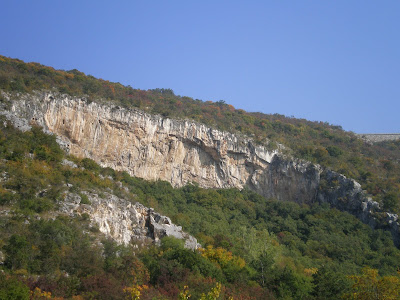 While climbing a 6a, there was a child next to us climbing an 8a+, this made me feel somewhat inadequate. As it was slightly colder the rock was very grippy, perfect conditions!
After climbing, we headed to find a supermarket as someone was getting a bit sick and tired of just eating tuna. We headed to Koper, a lovely Slovenian seaside town. All of us were excited at the prospect of getting food, but all supermarkets were shut. It hadn’t crossed our minds that it was a bank holiday in Slovenia. After having literally driven around in circles (around the roundabout) for about 5 minutes, we decided it would be a better idea to get something to eat in town. We found a kebab shop; this was one of the best moments of my life and I’m sure others would agree. I have never seen kebabs disappear so quickly.
The Scandinavian, Austrian, British car decided to find an open supermarket, some locals said if we headed towards Italy we could find a very big supermarket which is open until 8 pm. Marcus and Jarkoo bought 1 kg of cheese and enough meat to feed a family. All was going very well until we decided to head back to Osp, we ended up in Trieste. It took us more than 1 hour to get back, a journey which usually takes less than 30 minutes. When we got back to the campsite we had a wine and cheese party. Some of the wine was lovely others were absolutely disgusting and not worth being called wine! We all had a really good last evening together, once again laughing at mr. drunk Jarko and the fact he couldn’t taste the difference between good wine and bad wine, for him everything was GOOOOOOD! 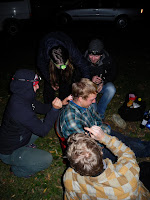 Once again we were blessed with good weather; although slightly chillier than the other days it was still pleasant. Everyone decided to leave at different times, one group left early to climb somewhere else on the way home, another group left at mid-day after having had a morning climb and then our car left at 6pm after having to be jumped started as the car battery was empty.
Roland and I decided to climb a 6b+ multi-pitch. It was definitely above my grade, but I was determined to get up, whether it meant pulling on my quick draws or on lovely blocs of wood or even being hauled up, thank you Roland : ) 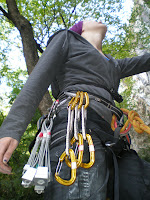 The view from the top was amazing. All in all I feel the trip was a success and I hope everyone enjoyed it as much as I did. Thank you everyone for such great company. 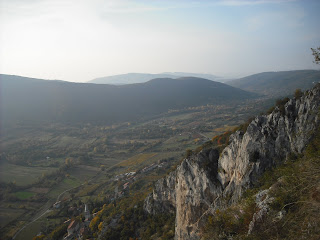 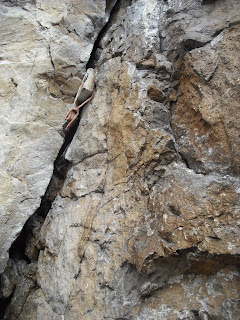 Thanx Naomi for writing the Blog and thank you all for the great weekend
See you soon!!!
Liebe Grüsse Verena
Eingestellt von StudiTeam um 22:46